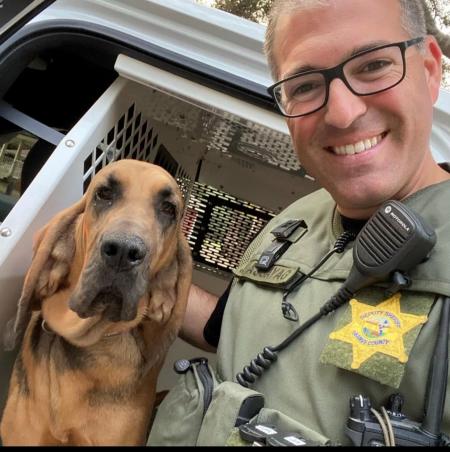 The windows were too dark to see in, but K-9 Remi knew what she was looking for was inside.

The floppy-eared bloodhound sniffed the silver car then stopped, her nose pressed against the door. Her handler, Deputy Assayag, knew this meant good news.

A patrol deputy used his flashlight to cut through the deep tint of the windows to find who they were looking for – a 70-year-old woman who had wandered from her home hours earlier.

A Mission Viejo man called the Sheriff’s Department at about 7 p.m. on Wednesday, December 16, asking for help to find his wife. He had checked the house and the neighborhood and was unable to find her.

Patrol deputies began their search on the ground while Duke, the Sheriff’s Department patrol helicopter, circled above the homes near Jeronimo Road and Alicia Parkway. Deputy Assayag and Remi also were called in to help.

Shortly after beginning her search, Remi alerted to the parked car in the neighborhood to find the woman safe inside and sitting in the passenger seat. Deputies learned the vehicle, which was not related to the family, had been left unlocked.

We are grateful this team was able to safely reunite this woman with her family.