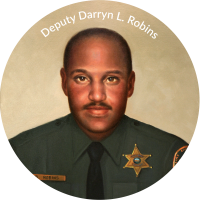 Darryn L. Robins was a seven-year veteran of the Orange County Sheriffs Department. Darryn graduated from Sheriffs Academy Class 73 on May 27, 1986, and was assigned to the Central Jail where he worked for the next four years. Supervisors in the jail saw him as extremely competent and able to interact equally well with both inmates and peers.

Deputy Robins began his patrol career in the South Operations Division in January, 1990. Darryn successfully completed field training, receiving high praise from his Field Training Officer. His first assignment was as a patrolman for the city of Lake Forest. Darryn liked working with kids and it was in Lake Forest that he took advantage of an opportunity. Speaking at the elementary schools, Darryn frequently performed a rap version of "Officer Friendly". The children called him Deputy "Rappin" Robins.

Darryn also went to many intermediate schools, where he developed a realistic presentation to encourage young boys and girls to avoid gangs. He addressed nearly 1,500 students in his efforts to influence those youngsters to remain strong and not give in to the pressures from others to join gangs or use drugs. He was a positive role model for those kids. Darryn's career was dedicated to the community and to the children within it.

Deputy Darryn Robins' untimely and tragic death in December 1993 during an on-duty training mishap, has left the entire Sheriffs Department and the community with a deep sense of loss and grief. A positive and caring person, he will be remembered for his love of life, his love of the community and especially his love for children.

Because of the record he established in his relatively short law enforcement career, because he always set his standards high and because he epitomized what a professional law enforcement officer should be, the department honored his memory by presenting the first Sheriffs Memorial Medal to the family of Deputy Darryn Robins.