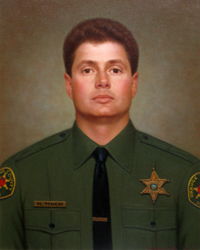 Deputy Mark Tonkin, an eight year veteran of the Sheriff-Coroner Department, lost his life in a helicopter crash on Monday night, October 24, 1988, while assigned to DESERT RANGER, a multi-agency cooperative narcotic enforcement program in the state. Mark was one of eight victims aboard a California National Guard UH1H Huey Helicopter which went down and burned in mountainous terrain near El Centro, California.

Deputy Tonkin was survived by his wife, Mary Ann, and parents, James and Gloria Tonkin, of Whittier.