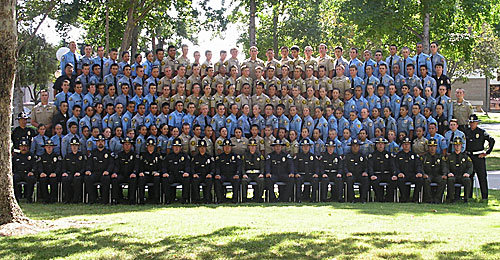 Most Inspirational Explorer (Voted on by fellow Explorers):

We would like to recognize the following Sheriff's Explorers for completing the 2006 OCLEEA Explorer Summer Academy.

Explorer Post 449 would like to thank Deputy Sherri Gilman (South Operations - San Clemente Police Services), who was the Director of the Academy, Deputy Bart Epley (Community Services Division - Community Programs) and Deputy Victor Valdez (Intake Release Center) who mentored, trained and monitored the explorers in their role as Explorer Academy Tactical Officers, and Explorers Carl Dossland, Yanira Rojo, and Spencer Crisp for assisting the Tactical Officers at the academy.

Explorer Post 449 would also like to thank Deputy Jim Hoffman and his K-9 Zappa for the excellent demonstration and training at the academy and Sheriff's helicopter Pilots Deputy Dave Tilstra and Deputy Mike Russell for landing one of the Sheriff's helicopter's at the base for the explorers to observe and talk to the pilots. We would also like to thank Senior Crime Prevention Specialist Jan Sener, who arranged for the academy to use the fatal vision goggles for the D.U.I. class, taught at the academy.

Explorer Post 449 would like to thank the following Sheriff's personnel for their assistance with staffing, funding, training and equipment needed for the Academy: